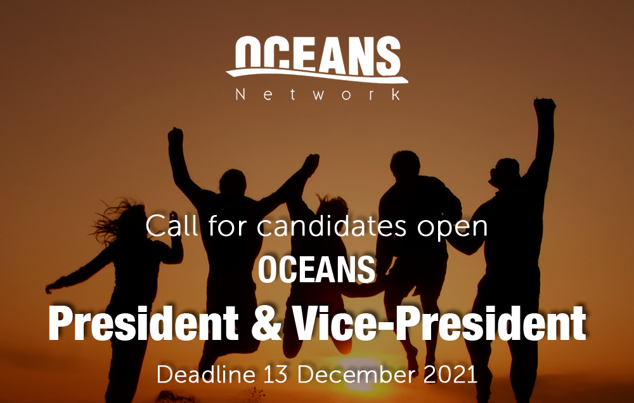 Committed OCEANS members are warmly invited to apply for the position of the network’s next President or Vice-President for the term 2022/23 (starting in Feb/Mar 2022). Application submissions are open from 26 Nov – 13 Dec 2021!

Why apply for President and Vice President of OCEANS?

Volunteering in OCEANS is a great chance to learn new skills, to gain some valuable working experience and make a difference by helping OCEANS advance as an international organisation. Of course, it is also an opportunity to meet new friends and build up your personal network with people from around the world.

The year-long position will require around 10 hours per week to lead and represent the OCEANS network both internally and externally. Find out more about the duties and details for the positions below:

Duties of the President

Duties of the Vice-President

This is a yearlong position and candidates for the Presidency and Vice-Presidency should expect to devote up to 10 hours a week to this position. The position requires frequent international travel on behalf of the organization on a relative short notice.

Please fill in the following form for the position of President or Vice-President: application link!

Please fill in the application form as mentioned above. OCEANS will host an internal election to determine the next President and Vice-President.

During the time from 14 Dec – 23 Dec, we will promote the different candidates on social media and our community platform, and the candidates will be able to answer any questions from members. A town hall meeting is also planned to take place on the weekend of the 18-19 Dec.

We use cookies on our website. Some of them are essential to ensure functionality, while others help us to continuously improve our online offering. You can find more detailed information in our privacy policy and on our cookie page (see footer). You can also edit your settings there yourself at any time.

Here you can select or disable different categories of cookies on this website. By clicking on the info icon you can learn more about the different cookies.